How Tall is Kennedy? And What about Berkley at 2 1/2 months? 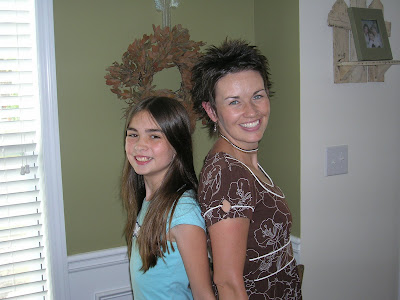 It's been a while since I've actually had the time needed to sit down and catch up on everything that has been going on in our family. There are five more new entries below this one so be sure to check them all out if you want to see what we've been up to the past month or so. This picture is for you Jean. When we were on the phone you asked me if Kennedy was taller than me. She still has a way to go before she passes me up! 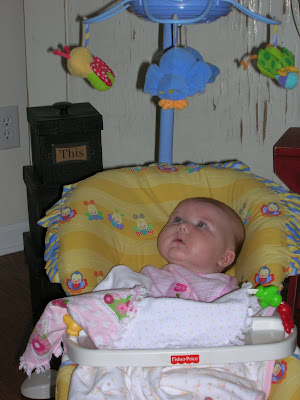 Whenever we put Berkley into her swing, the first thing she does is look up to see the little birds and butterflies that spin around. She loves to watch them! You also have a pretty good shot of her cheeks! She doesn't want to be out done by her sisters and their cheeks when they were little! 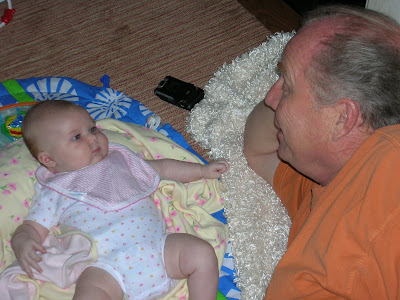 A little talk with Grandpa! 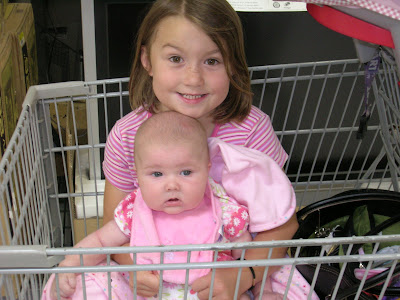 We were at the store and Emree wanted to hold Berkley so we put her in the cart so that she wouldn't drop her. 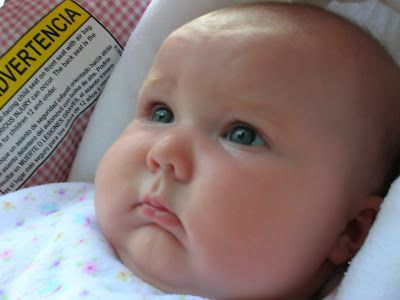 Here are a few picture of different faces that Berkley was pulling the other day. 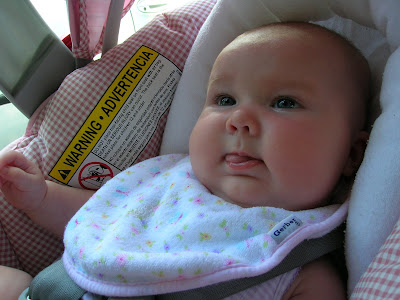 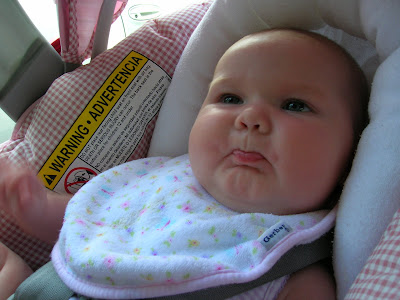 She was looking at her toy that hangs from her carseat handle. She got very excited and kept pursing her lips. It was cracking us up. Berkley has start to show us her little personality. She loves to talk to us and gets so excited over things. I even managed to make her laugh yesterday. The girls are just loving it! It is so much fun to watch them interact with her. Berkley is definitley not starved for attention! When she gets older we'll have to ask her what it was like to be raised by four mothers!

What fabulous pics, you all look so great! Looks like you all had such a wonderful time with the Curtis'. So fun to see you all, we hope we get to see you soon! Love you all.

You look so good Marcie you can't even tell you had a baby 2.5 months ago!! Berkley is precious I will post some pics of Ashley and you can see how much bigger Berkley is than her.

Holy posts! It must of taken forever but were glad you did. I love your shirt. I love Berkleys cheeks. I think she looks like Brackon in a girly way. You all look great. It looks like you had so much fun with Grandpa and Grandma Curtis. I love the fish pictures. Sicily loves the pictures of the Birthday party and Berkley. Love you

Berkley looks scrumptious! I know we have sooo many things to post and for some reason I can never figure out how to do it on my own so I always leave it up to Ben...and he is a busy man! It will be a lot like your posts-a whole bunch at once. I need Ben to walk me through it so I can just do it myself! Such cute pics! Love you guys!

ahhh thanks marcie i needed that

thanks marcie i needed that

Great updates Marc!! It is always so fun to catch up on you and your cute family through the blogs! You look fabulous and I love your dress in the first picture! I have the same one, as do 6 other women in my ward! Seriously, we either need to all wear them on the same day or have a scheduled rotation! Anyway, I'm glad you are all doing well! Wish I could see you more often. Maybe we need to plan a weekend girls trip somewhere fun! Love Ya!