A Day at the Lake! 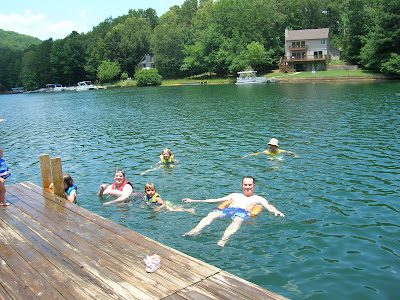 The Spiedel's are a couple that we know at church who have a home on the lake. They invited us and a couple more families out to their place on Saturday for a BBQ so we headed out to spend the day at Lake Arrowhead. We spent the afternoon swimming, riding on the boat, tubing, and relaxing! The kids had a blast jumping off their dock and just floating around in their life jackets. 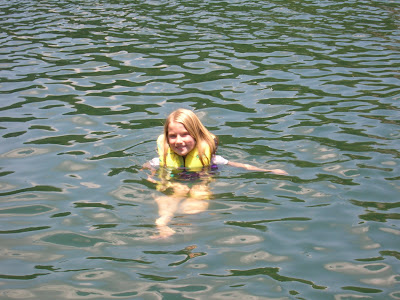 Morgan is a little nervous about putting her head under water. She had tubes put in when she was a baby so she's never really put her ears in the water. This last week she realized that it isn't as scary as she thinks it is! She has been putting her head under the water and having us count to see how long she can stay down. She's gone to six and is very excited about that! She loved being able to practice her swimming while having on a life jacket. She's great at doggy paddling, but gets tired very quickly. We've been trying to teach her to do big kicks and move her arm's in front of her and 'scoop' the water. She's doing great! 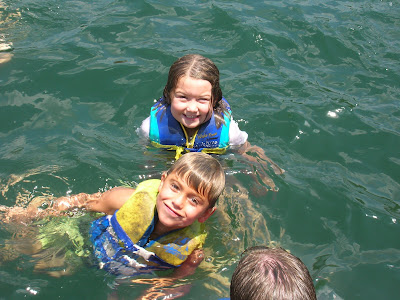 Emree is our little fish! She was the only one who would jump off the front of the boat & ride the tube. She went on with Brackon and our friend Richard rode the other one. Richard kept bumping into them and as you can imagine, with it being two men on the tubes, the boat was clipping pretty fast! Dear brave Emree! Our little neighbor Reese came with us too! 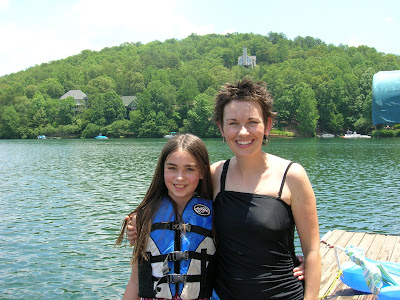 The view from off the lake was beautiful! 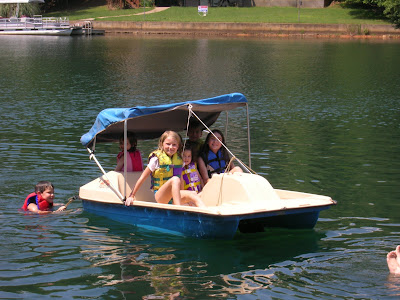 It took a little persuasion to get some of the kids in the lake because of all the fish. In the middle of their dock was a 12' x 10' opening that we threw bread in and a million fish would swim up. Reese thought that he was going to get eaten by a sea monster. It was a lot of fun. The kids especially loved the paddle boat. They loved being out on the lake by themselves. A great time was had by all!

Marcie you are the queen of blogging!! It looks like you guys had a ton of fun!! I am so jealous, you don't even look like you had a baby and Ashley will be 4 months tomorrow and I still have a major baby belly!! No fair!! Lucky you!!

Looks like a ton of fun!! That's one thing I miss in Colorado. There aren't very many lakes! It's strange, but true!!

What a fun day!