Every Year the fourth graders at Cherry Hill Elementary have a 2 mile pioneer trek to go along with their Utah history class. They get real handcarts and have them dress up like pioneers were dressed back in the day when they were on the trek from Nauvoo to the Salt Lake Valley. Even the chaperons have to dress up! It's a good thing my mom had pioneer clothes that I could borrow. My younger sisters had a trek that they went on once upon a time (I think when they lived in Michigan) so she made clothes for them then. 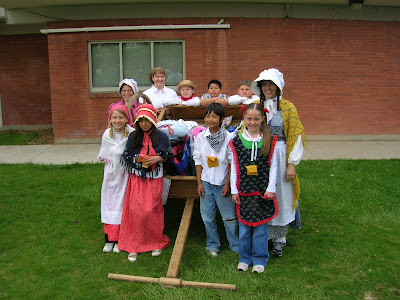 Morgan (right), Elle (left), and Maria (center) are best friends and were in a group together. 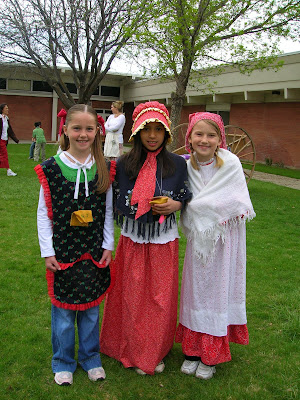 Morgan and I getting ready to go! I was worried when I posted these that people who weren't Mormon would think that we're FLDS - WERE NOT!!! Fabulous look isn't it?! For as many layers as they wore it's surprisingly cool and comfortable, though towards the end I was dying to take the 'wig' and bonnet off, but we all know that that was not about to happen. I would've terrified everyone! I roasted my rear end off at the end! 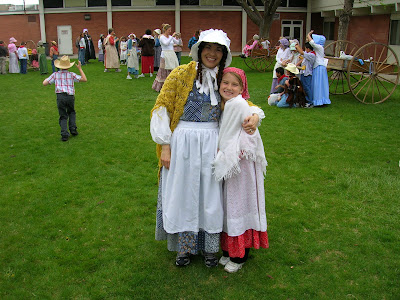 We started at the front of the school and as we got towards the back of the school they had all of the other grades out on the lawn waving goodbye to us. It was so cute! 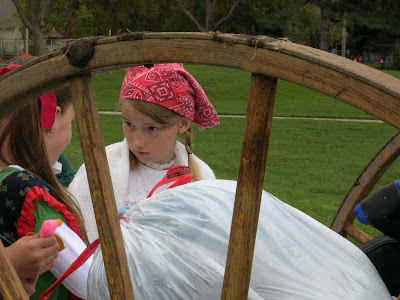 There were 3 check stops that we came to along the trek. There were 10 handcarts altogether and the first 6 or 7 'families' lost their boys to the Mormon Battalion. 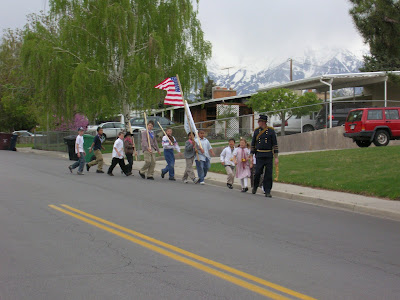 The boys in the Mormon Battalion had to go a different route that was a lot longer than the original trek. They even had wooden guns to carry. By losing their boys, the girls were left to pull the hand carts by themselves. We were handcart #9 so we didn't lose any of our boys, but 2 of our boys broke their legs and the other 2 were shot, so they had to ride in the cart. Our poor girls are so little and we had some big boys so parents had to help pull, especially through the field. 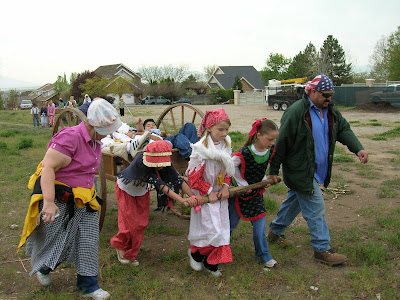 At the second check stop they told us that Morgan had fallen ill and needed to ride in the handcart. She was so excited! 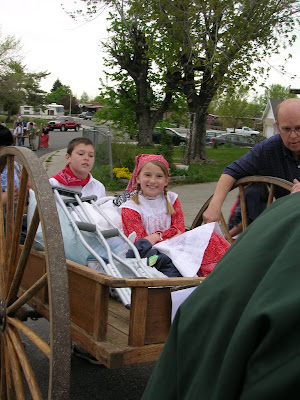 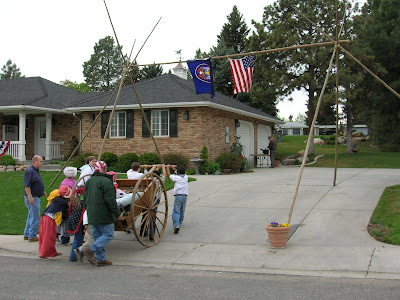 We all parked our handcarts. 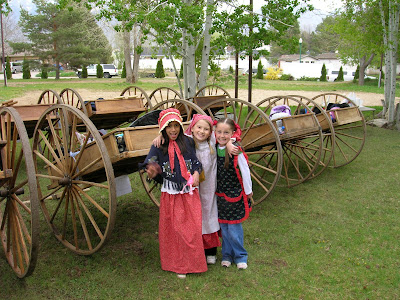 A gentlemen that specialized in pioneer history from St. George came to talk to us and brought a ton of fun things for the kids to do. They made butter. 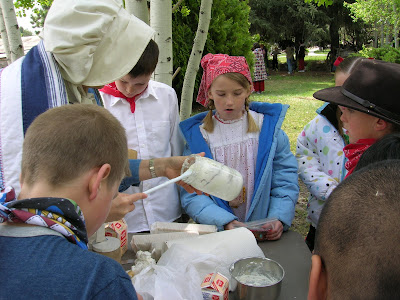 They had old tools for the kids to see how they did carpentry work back then. These particular ones were tongue and groove tools. 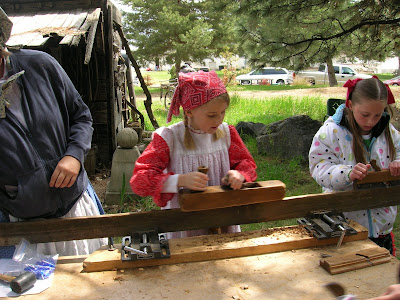 They had a really fun rope swing. The kids had to climb up on a huge rock to be able to get on it. 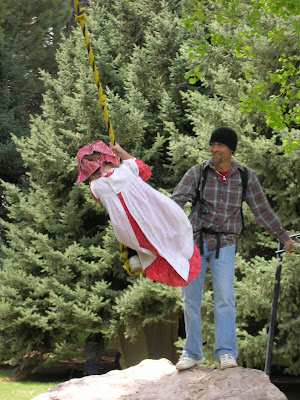 They made rag dolls that were adorable! 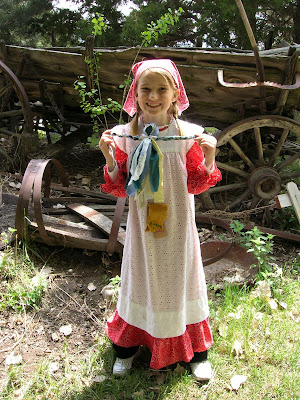 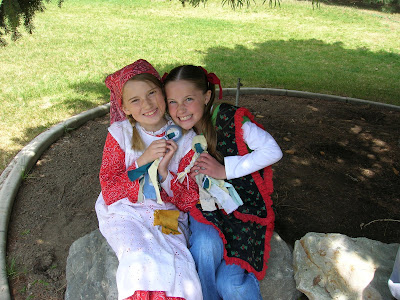 The gentlemen who came told the kids about the first capitol building that was built in Filmore. The building was made out of sandstone so he brought some so that the kids could see how hard it would've been for them to build. 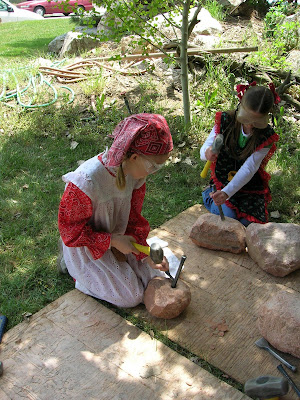 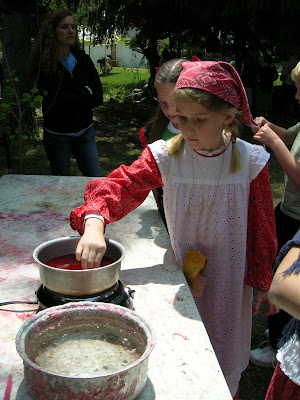 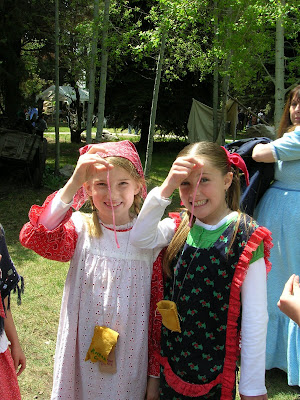 All together there were about 10 different centers that the kids could go to. Every time they completed a center they would get a special colored bead that they would put in their little leather bags they made and have hanging around their necks.
Finally they learned a little dance before we headed back to the school. It was really a fun activity, one the kids will never forget. 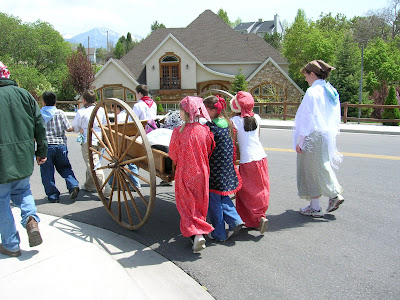 my angel morgie ~ such a sweet little "pioneer girl" face! how lucky to have mom along. an experience you wont soon forget!

CUTE pics! So fun! I hope to go next year!

That looked like a lot of fun. We have a youth pioneer trek here in July and at first the stake were having the kids dress up like pioneers. But ever since the whole FLDS church thing came into the news, the stake decided to not do the pioneer clothes to prevent other people from associating us with the FLDS church. Interesting times.

cool cool i wish i could of done that when i was in 4th grade.