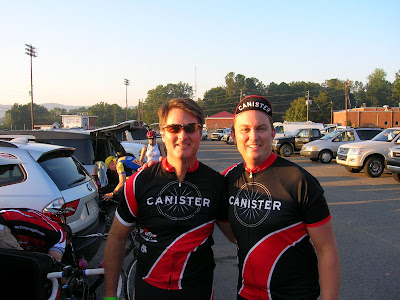 This is for you Jeannie! You wanted to see pics of Brackon and his bike. He and a few of his friends were in an organized bike ride this Saturday the 11th in Northern Georgia. They rode 63 miles and it was so hot and humid. They'd had heat advisories the whole week and Sat was no exception. This first pic is of him and his good friend Zane. Zane is the one who got Brackon really involved in road biking. Zane did the 100 mile ride with a some of the other guys. 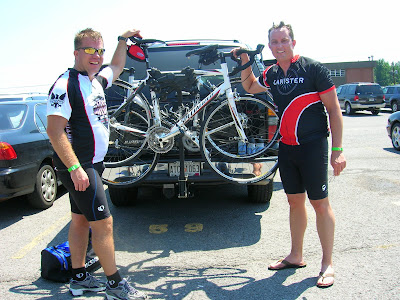 This is Mike he works with Brackon. This was his first ride with the guys. He did the 63 miles with Brackon and Justin. The pic was taken after the race so they were exhausted and had an hour and a half ride home from there. In our ward there are about 12 guys that ride together. Brackon loves it and has lost 30 lbs already.

Great pics. It looks so fun. Does your bum hurt still or do you have a biker bum. Love you lots

Brackon I am soooooooooooo impressed. I would have died. Good for you!!! Love you.

Hi Brackon. Candice and I were talking about the good ole days and I told her I would google you. Well I did and I found you. Love your blog. Your girls are so beautiful and so is your wife. How can I get a hold of Paige?? DO you have her email. Email me or comment on my blog. Hope to hear from you Keri Wright Christensen--- kerilynn71@hotmail.com