Did You Say Rancho Cucamonga? 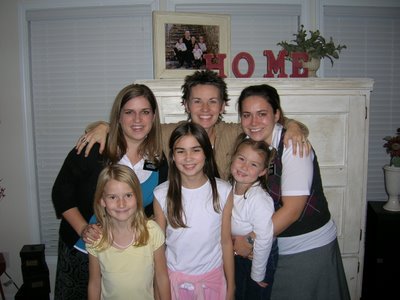 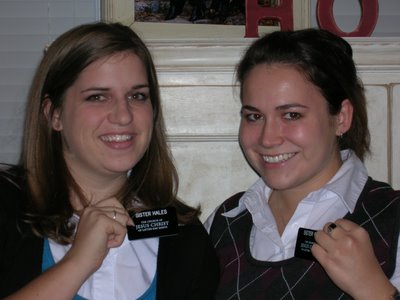 How fun is this! Last sunday we got a new sister missionary in our ward. She was sitting next to me in Ward Council and she looked so familiar. When the meeting was over I saw her in the library and told her that I thought I knew here from somewhere, (which we all know I always think that someone looks familiar to me) and she told me that she thought she knew me as well. When I asked her where she was from she told me California and then made the connection. She told me that she was from Rancho Cucamonga and that we were in the same ward when Brackon and I lived there. Who knew that I would run into someone that I knew in Cucamonga all the way over here in the South! Anyways, we had them over for dinner tonight and had such fun catching up. Her name is Sister Olson and she is the sister with the darker hair. We wanted to put her picture on the blog so that her parents could see some pictures of her and know that she is doing fantastic and is a wonderful missionary, as I'm sure they knew she would be! Sister Olson wants her parents to know that she is feeling better and only had a cold. She also got cursed out in the parking lot for the first time. She says, "Apparently people don't believe that we have a living prophet on the earth today." She just wrote her parents so they should be getting a tape soon. Hugs and Kisses from her!!!! (We did not break any mission rules in this creation process. Sis. Olson did not lay her fingers on this keyboard.) We have great sisters in our ward and it has been so fun to have them in our home every month.

I'm sure her parents were soooooo excited. What a small world. Love you.

~That is Hilarious!!!I still can't get over it. She totally looks the same...but older, ya know. ~Love you~