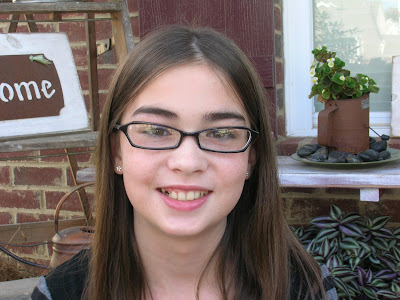 On Sunday at the youth fireside we realized that Kennedy needed glasses as she tried to read something off of the projector screen and couldn't until she was literally in front of it (winner mom of the year for not picking up on that one)!!! We took her into the eye doctor where they told us that her world would look a little different to her from here on out! She found some glasses that she loves and just got them today. She's excited and we wanted to be able to get a pic of her up on the blog with her new spec's on!!!

Morgan now wants glasses and keeps taking Kennedy's and mine to try on. Of course, I finally had to have the whole, 'if you break Kennedy's glasses you will have to pay for them' speech to which she responded, "How much are they?" Our sweet Morgan!

The only thing that bothers Kennedy is the fact that her mile long lashes hit the lenses so she has to use an eyelash curler to try and remedy that situation! I'm sure she'll get used to it. Either that or she'll have to get contacts.

Kenners you look so beautiful! How fun to get glasses. I'll bet you're saying things like "I never knew things could be so clear" or "I never noticed that before". How fun for you. We can hardly wait for you to come. We are so excited. . . and so is everyone that we tell. Love you.

So cute Kennedy, I love them!

I absolutely love your glasses! I have always wanted a pair like that but they don't look good on me. You are such a cute girl!! Love you!

ahhh my sweet kennerbugs you are too beautiful. I can't wait to see you again.

Oh Kenny ~ You are soooo cute! I love your glasses. It so reminds me of when I got my glasses. I was much younger. I wasnt nearly as cute either. You picked some very cute glasses. "Just Right"! So glad you are moving closer!!! love you tons ~ grandma

Love the glasses kenner bugs! Now we're twiners!!! They look so sassy on you♥ We miss you---Love you---

Holy posts! I haven't checked in forever. Some of the pictures aren't coming up so I'll have to check later but the ones that have come up are so cute. I can't wait to see your glasses kenner's. Love you guys.

Hey Marc, Don't feel bad, last year they had a vision/hearing screening at the kids' school. I got a notice home that Spencer had some problems and needed to go to an eye doctor. I asked if he could see clearly and he said yes so I didn't take him in. Then in March I got a letter asking what we'd done about their recommendation. Simply because I didn't want to look like a negligent parent I made an appointment, to my surprise (I don't know why I was surprised considering the above mentioned reccommendation) Spencer has astigmatism and needs glasses. Oops on my part! When we got his glasses I put them on and the poor kid has been seeing everything blury for years!! I guess i'll have to wait until next year for that Mom of the year award! :-) sorry I haven't called you back yet. it's been very busy lately! love ya!

Such cute glasses Kenners! Maybe you can help me pick out some new ones when you guys are here! We are all so excited that you will be so close...not much longer...YEAH!!

hey, , I really miss you guys already. oh, , and i slept with kennedy(my stuffed animal) last night. i can't beleive that you moved to Utah!!! it is so weird not having you around, or not even planning a sleepover. i hope that we can stay in contact though. i will be sure to check my e-mails everyday, hoping that kennedy will send me something.

ok so here is a memory I have of you guys. We were having a little BBQ in your backyard and you guys were talking about having another baby someday. You said you would like to try for a boy and Brackon said that if you had another girl you guys would just be buying tampons for the rest of your lives. I remember thinking that was one of the funniest things I had heard. hahahahaha!