The 4th of July

This picture somehow got erased from the bottom of the post so I put it back on again and don't know how to move it to the bottom. This is a picture of Kennedy and Emree with some of the neighborhood kids on 4th of July evening! 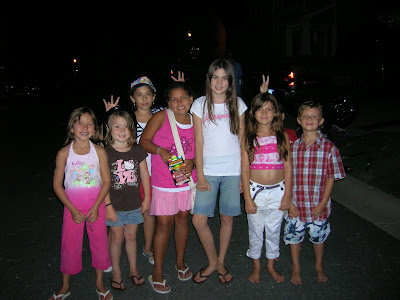 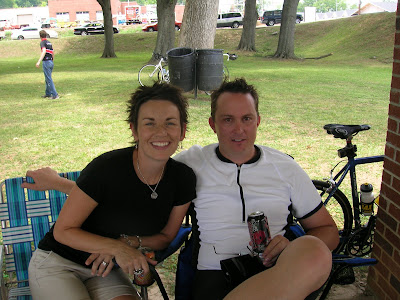 The 4th of July was a busy day for us. We were up and out the door by 7:15am to head out to The Silver Comet Trail! The Silver Comet Trail is an old railway path that is about an hour and a half from our home. They removed the railroad ties and paved a path for bike riders. Brackon has recently taken up riding with a group of guys in our ward. There are a quite a few of them, but there was only eight of them that met with us on this particular day. Part of the trail runs along a park with pavillions and a stream so we went there to ride and have a BBQ. Some of the wives even rode, but I stayed back with the kids. Brackon and his friend Justin took the longest ride. They rode 42 miles!!! They were only about 5 miles from the Alabama border! They didn't realize they were that close or they would've kept going. 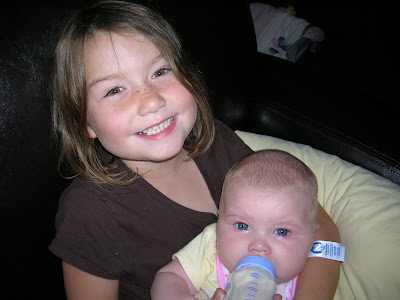 Emree was our biggest helper and feed Berkley when we got home from the trail. You can see how blue Berkley's eyes are in this picture. Around 6pm we headed to our other friends for another BBQ and fireworks. Berkley was exhausted and feel fast asleep. I would've liked to join her. 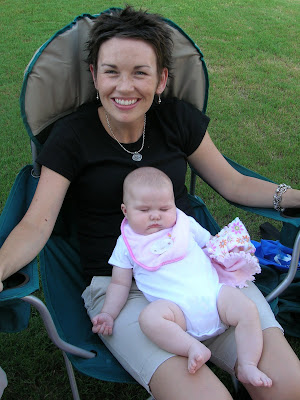 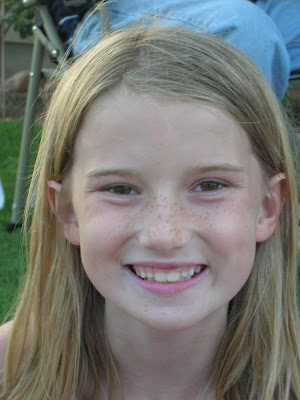 Morgan was having so much fun running around with her friends. There was six families there. We all had a great time! 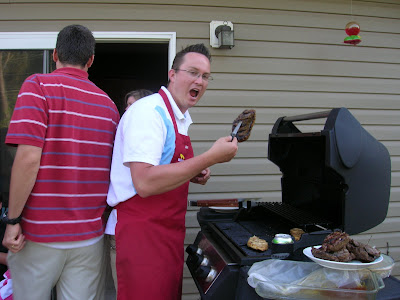 Brackon cooked up some steaks for us. They were yummy! Take note of the In-n-Out apron!
My next door neighbor's boyfriend is a fireman and one of his friends sisters lives down the street from our friends. Every year they have an amazing fireworks show with illegal fireworks so her brother will show up with the water engine just in case. 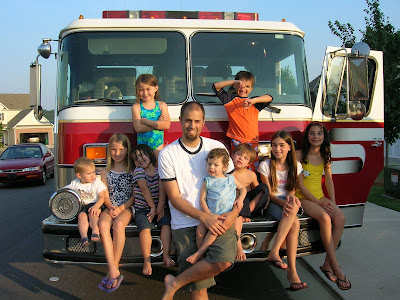 He let all of the kids climb into the fire truck if they wanted and gave them all hats. They were tickled pink about the whole thing! It was like going on a field trip for them. They were so thoughtful and kind to the kids! It was the highlight of their day. When we got home the neighborhood kids were all out on the road. Our kids were so excited to get out and spend some time with their friends since they didn't get to see them all day. All-in-all it was a long and exciting day. You'll have to ask me about the firework that malfunctioned and shot out the side instead of shooting into the air when you have me on the phone. One of my girlfriends went into protective mother mode with her children. Picture fireworks spraying all over the place and total caos! She was histarical & very impressive!!! We all learned that night who the real mom is out of the group of us. A big shout out to Stephanie Meredith! We love ya girl!

I just had another pic here with the neighborhood kids that I somehow deleted when I backspaced. Fancy that! When I want a pic removed I can't fiqure it out and when I want it on I delete it! I'll add it again, but it will be at the top of this post now instead of here where I wanted it.

Glad to hear you had a great 4th. Berk has such pretty blue eyes that would be fun if they stayed blue!! She is such a cute big girl or "grill" as Blake says.

You guys all look great! Way to go Brackon! We'd be happy to ride with you out here. You too Marce! Looks like you guys had a very full, fun day.

So good to see all your pictures. We sure do miss you guys. We're very excited for you to move closer. What a ride Brackon. Were you exhausted? So fun to see pictures of all of you. You are such a big helper Emree. And you are all growing up so fast. Such beauties. We love you so much.

Looks like you guys had a fun 4th. We sure do miss you and all Brackons good food. Sure love you. Your little Berkley is getting so big.

Sounds like you guys had a fun 4th. The girls are getting so big. We miss you guys! Love you♥

WOW, i'm tired just reading about your day. I'm glad you had fun! We miss u tons. The girls are looking forward to seeing all of your girls again.... soon they hope!!!

Oh my heck...Morgan looks just like Kacie to me!!! And how cute and chubby is Berkley??? What a cutie! I just miss your family so much!